JEFF’S STORY  The Early Years  back to HOME 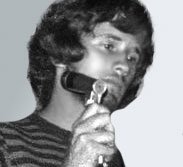 In 1966 Jeff Pasternak, songwriter, artist and son of legendary film producer Joe Pasternak, was strongly advised by his father not to get involved in Show Business. However, after meeting Elvis Presley on an MGM soundstage Jeff quickly forgot that advice. Months later, out for a good time at the London Fog on Hollywood’s Sunset Strip, Jeff and a friend found their way to a sleazy backstreet bar and Jeff’s life changed forever.

The club was almost deserted as they waited for the new band they’d come to hear. Then, around 9:00 pm Jim Morrison and The Doors strolled onto the tiny dance floor. Jeff was captivated and mesmerized. He recalls that surreal night as one of The Doors’ very best performances. “I knew after I left the club that night that this was the style of music I wanted to write, and the singer I wanted to sound like.”

Shortly after that evening Joe Pasternak approached Jeff, asking, “What rock and roll band would you recommend for my new movie, The Sweet Ride?” Jeff immediately told him about The Doors, whom Jeff had been following to about every gig they had around L.A. By then, Jeff says, “Their music and energy had saturated every part of my being.”

In a few more weeks Jeff had convinced his friend, John Branca (to later become one of the world’s top music attorneys) to experience The Doors. Two months later, Jeff and John had their own band, The Mustard Greens. “I was on top of the world,” Jeff says, “co-writing original material with John and waiting for my dad to sign The Doors. Who could ask for anything more?” Unfortunately for both the film’s success and music history, Joe Pasternak chose to sign Moby Grape, because they wanted $5,000 less. Shortly thereafter Light My Fire soared up the charts, racking up sales and fans. That’s Show Biz

Then Jeff’s rebel ways at home resulted in a one-way ticket to the sidewalks of Hollywood. “I’ll never forget the family chauffeur bidding good-bye to me and my stereo on a side street one block from The Whiskey a Go Go. A few nights later inside The Whiskey, Jim Morrison was screaming at his parents on stage, and the song, The End, had me questioning my own destiny,” Jeff recalls. 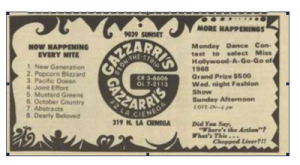 By late 1967 The Mustard Greens found themselves playing right down the street from The Doors at Gazzari’s on the Strip. Then came the Battle of the Bands and the Teenage Fair. “Hundreds of bands entered the contest and thousands of screaming teens cheered us on to second place in a very close race. At least we performed all original material,” Jeff says. 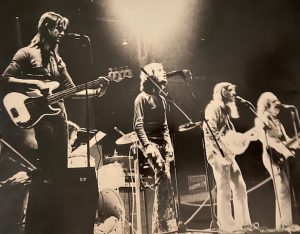 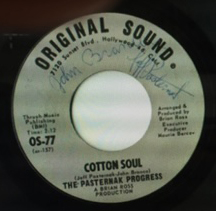 “Just when I was feeling down because we weren’t gigging enough, John came yelling into my room, shouting ‘I got us a gig at The Hullabaloo and guess who we’re opening for? The Doors!’ That night was a fairy tale came true! If opening for The Doors wasn’t enough, we also played that night with Alice Cooper and Big Brother and the Holding Company.

A month later their second single was released and looked good on Billboard, but not good enough. Art Leboe, famous West Coast disc jockey and owner of Original Sound Records, decided not to renew their contract. His reason? He didn’t need another group that sounded like The Doors. Jeff says, “John and I were shocked and tried to modify our sound and style, but it was too late. As a last attempt to re-sign with another label, I came up with a whole new approach by painting my face with white make-up and wearing a purple velvet puppet costume.” Not surprisingly, the band broke up within a few months. Even Jeff in full regalia holding up traffic to dance across Sunset Boulevard didn’t get the attention of a music executive. John went back to school, leaving Jeff a solo writer.

It was a rough passage. When Bill Malone, aka William Malone, decided to open a folk club in the basement of the original Guitar Center on Sunset Boulevard and Gardner in Hollywood, he invited Jeff to help him. The previous disgruntled tenant had trashed the small theater. When they finished their renovations it became Arty Fatbuckle’s. During this new era Jeff drew inspiration for continuing his struggling solo act from Poco, Hamilton Camp, Judee Sill and Paul Potash among others. 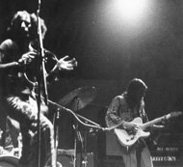 1969 found Jeff moving to England to join his old brother, Mike, in his London flat. Mike, known internationally as Emperor Rosko, had become famous as a disc jockey in Europe and Great Britain. Jeff threw himself into the British music scene and eventually he, Darryl Read, Chris Gibbons, Ian McDonald and Lou Martin formed a band they called Krayon Angels. “I picked the name in honor of a Judee Sill song,” Jeff says. “Our first gig was at The Revolution, a small, hip club in London. We weren’t very good, but we were loud, so loud that we nearly brought down the crystal chandelier.”

The band got better with experience and Lee Hallyday, a noted record producer, recommended to Rosko that Chris Gibbons and Jeff should sign as a writing team. Now calling themselves Bastado Jones, Jeff and Chris said a sad farewell to the rest of the band. The chance to record with Mick Jones, Gary Wright and musicians from the London Philharmonic Orchestra was far too tempting to turn down. With arrangements by Bill Shepard, the all-too-familiar Bee Gee sound was interesting but lacked the luster and drive that Jeff and Chris had counted on. In the end the album wasn’t completed due to poor management and very bad luck.

Jeff and Chris formed another group, this one called Smooth Loser, in 1971. Jeff recalls, “We were so disappointed at this point that we thought the name evoked a mad kind of humor.” They teamed up with Daniel Adler, a lead guitarist from America. With more material, Smooth Loser invited Paul Huggette, Malcolm Mortimore (Gentle Giant) and Tony Lester to join in the Emperor Rosko Tour around England. 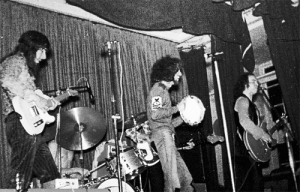 By 1972 the British authorities weren’t overly keen on letting Jeff stay in England and pulled the Welcome mat out from under his feet. Jeff returned to Hollywood, hoping to discover yet another group. He signed as a writer with Cherry Lane Publishing. “As a writer for other artists I was impatient and frustrated, and not willing to follow the mainstream advice of Milt Okun, owner of Cherry Lane,” Jeff says. “I felt I could do better on my own. I eventually submitted a song to Frank Sinatra’s publishing company, which they said they loved. For a year I heard ‘the song’s incredibly good…’, ‘really getting close now…’, ‘Frank likes your lyrics very much…’. By now I could hear Old Blue Eyes signing my song on the radio while I expected contracts to arrive any day. I felt I was finally on my way as his LP neared release. The day before The Trilogy LP appeared in stores a Sinatra executive called me to say, ‘Jeff, regretfully your song was edged out by another one with similar content.’ Torn apart by disappointment, I wrote the song Hollywood Survivor, my answer to coming to grips with the reality of the music business.”

In the early 1980’s Jeff met his wife Shannon, a veteran of the record industry, who has given a great deal to the music world in her own right. “Shannon has been my best critic, editor, co-writer and friend, giving me more support than I could ever have hoped for,” says Jeff.

Currently THE HOLLYWOOD SURVIVOR musical is being written for film with eighteen songs by Jeff Pasternak. Some of the songs are available now on Jeff’s CDs: The Hollywood Survivor, Bandits of the Soul and Double Cover. And if you’re wondering what happened to Bastado Jones, stay tuned, ’cause it’s not over ’til the fat lady sings one of their songs. Pasternak and Gibbons shall prevail!!